In the next several chapters we will be taking a look at different student projects. Projects can be used to teach or reinforce many of the concepts we have touched upon previously. They are good practice for those who wish to deepen their understandings of 3D art’s foundations, or also good to implement into a classroom to teach beginners. Each chapter contains a project description, the learning goals of the project, and real student examples. The project we will be looking at in this chapter is Kitsch: The Ashtray From Hell.

Project one: The Kitsch Project 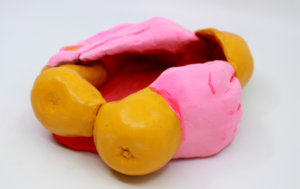 For students to gain an understanding of ceramic terminology.

To learn the principles of working with ceramics as a medium.

To create a ceramic piece by starting with concepts and developing them into form.

In this project, you will be using clay and your mold making skills to communicate the idea of Kitsch. Using molds of your chosen piece of fruit and hand create at least 5 multiples out of clay. Using these pieces and a slab-built clay cylinder/vessel (2.5″ high x 6″ wide), combine them into a visually interesting, dynamic kitsch ashtray from hell.   Think about how the viewer’s eye moves!  This could be up and over, through or any way you decide as long as the overall composition is Dynamic! Be sensitive to the repetition and gesture of the pieces to direct the viewer’s eye movement throughout the composition.

Slip and score– attaching clay to itself require the action of wetting the surface of both parts with water or slurry and then aggressively scoring both surfaces to create a firm connection. Think of this process as creating ceramic Velcro, with interlocking teeth, to connect surfaces.

Slurry– clay that is of a wet mud or pudding consistency used for making connections between wet to leather hard pieces of clay.

Greenware – any clay before being fired in a kiln. Greenware consists of three stages of dehydration.

While working on this project students were also asked to read up on Kitch. That article can be found here, but feel free to incorporate your own readings. They were also given this study guide to help reinforce their understanding of Kitch.

The first student example we are going to take a look at is Ainsley Campbell:

For this project, we used plaster to create molds of our hand and fruit and used clay to construct a kitsch ashtray from these structures. The goal was to create something kitschy, and dynamic.

For the initial lateral thinking for this project, I looked more into the meaning of “kitsch”. I am personally a big fan of kitsch, and so I looked into several artists that work with this idea. I looked into Jeff Koons, as I already have seen his work and even own one of his miniature balloon animal figures.

Another artist I found was Karen Mabon, who makes these illustrated scarves, often with themes of kitsch.

Next, I thought about one of my favorite fashion designers, Erin Robertson, who definitely uses kitsch in her work.

Her use of pink and yellow screams kitsch to me and inspired my piece.

For drawings, I only did one sketch, as I wanted the ashtray to be pretty fluid and come naturally. That is how I prefer to work with clay most of the time. For my sketch, I focused on the gesture of the hands and came up with the idea of the apples to appear melting. I also sketched out a quick view of it from the top, with two hands holding it together with apples in between. I drew the base as an organic shape.

For this project, we did not do maquettes since the scale of the final piece is fairly small.

For material studies, I simply did a few test runs of putting clay in the mold and taking them out and blending them together. I have worked with this clay quite a lot before so I did not need to do too much material study. I instead focused on the clay in the molds aspect, as that is a new technique to me.

This piece was created to communicate the idea of kitsch through repetition of a common object and visual- hands and fruit. My final piece is successful, in my opinion, in communicating this idea, as well as my personal visions for this project. The pink and yellow colors I used in my final piece came from some of my initial inspiration for this project. While my piece shifted a good amount from my sketch, I still think it communicates the ideas I was going for. I tried to give the fruit a melting appearance but it simply wasn’t looking how I wanted it to, so I decided against it. As for the hands, once I started working with them, I realized I could manipulate them to doing different hand “Symbols”. I manipulated one to do a “finger gun” and the other to an “alien peace sign”. I thought that these symbols made the piece even more kitsch. In addition, I learned a lot from this project. I learned how to use plaster, make molds, avoid undercuts, and use plaster molds to mold clay successfully. I also learned the meaning of “kitsch” and how it is created. I learned that a repetition of common objects and “cheesy” or “cute” themes can help translate work into “kitsch”, something I am interested in. One way I think that I could improve this piece, would be adding a painted kitschy pattern on my piece, like polka dots. Another way would be to add another type of fruit or object. I could achieve this by making a mold of a banana and including that in my piece as well.

The second student we will be looking at is Sherry Lin

Project description: For this project, I was challenged to explore the idea of kitsch through a clay medium and by incorporating it into the form of an ashtray. The clay parts that I was required to use included my hand and a piece of fruit—these were shaped by the clay through the use of a mold. These parts were then arranged and integrated onto the body of the ashtray (made up of a slab-built clay wall and bottom base) in a visually dynamic composition. Besides the focus on making a kitsch piece, the primary goal of this project was to encourage the viewers’ eyes to move around. The clay medium was not a new territory for me as I had taken a ceramics class in high school. Building something that was conceptually based rather than focusing on the functional aspect/purpose of the final ceramic piece, however, was something I had not explored before. The idea of kitsch was also new to me so doing some prior reading on what it is was essential in understanding how to make the ashtray be categorized as kitsch. Going into this project, I knew that the piece of fruit and the hand was going to make up the bulk of the final product. This meant that mold would have to be built properly and precisely so that the pieces will come out well. Making a mold was something else I had never tackled before so learning this process was a crucial step for this project.

Sketchbook/drawings: To help me brainstorm what my design for the ashtray will look like, I came up with three different ideas or forms that would make up the main base and sketched four different ways to go about it. In the first idea, I simply experimented with the basic, traditional design of an astray. Here, I primarily explored different placements of each piece. I found that the arrangement of the fingers, hands, and apple pieces were dynamic but there was limited space to place these pieces due to the short height of the wall. 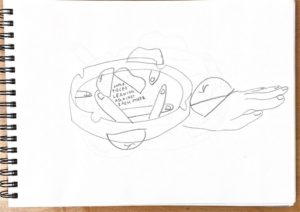 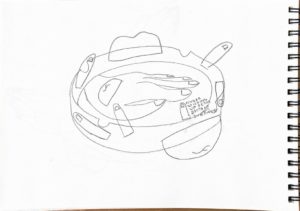 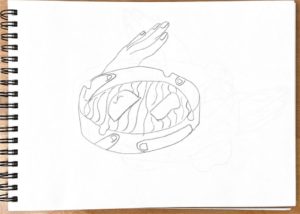 My second idea features a taller wall to allow more space for the pieces to fit better. I also started to think about texture and where to incorporate it onto the design. I had difficulty coming up with different ways to create texture onto the clay medium so I just applied one style onto the sketches and planned to create some texture material studies on the clay later on when I would be working with it. I also tried to think of more techniques to make the composition dynamic such as cutting the apple pieces diagonally in half (making it abstract) rather than keeping the top and bottom halves in its original form. 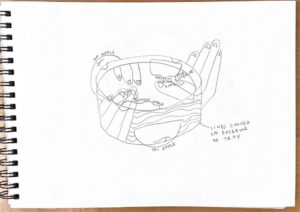 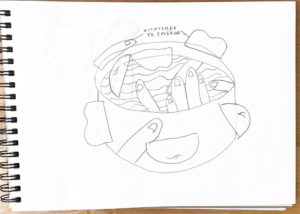 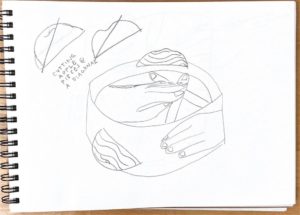 For my third idea, I departed from the cylindrical form and decided to cut it in half and stretched it into a taller wall to create more open space. I continued to explore texture and cutting up the pieces. I did not think that this idea was the most successful one due to the nature of the wall separating the front and the back of the piece. I found myself coming up with an arrangement for the front and then something to fill up the space on the back of the wall. This separated thinking did not allow for a unified and cohesive design. Although this did not end up being a strong idea, creating the sketches and further developing the design did make me realize that it would not work out. Overall, I found that these sketches were helpful in making me start to actively think about what would work and what would not work in terms of composition and how the hand and apple pieces function in different styles for the main body of the ashtray. 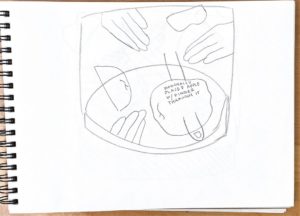 Lateral thinking: Since I was not too happy with the ideas I came up with and did not think that the composition was pushed dynamic, I brainstormed how to tackle finalizing the ashtray’s design by researching some photos online. I started out with the basic, traditional form of an ashtray in my sketches but then realized that it was too static—a simple circle with four symmetrical indents on the sidewall. Since I recognized that, I focused my research on unconventional designs. I found ones with higher walls, ragged edges, textured surfaces, and asymmetrically shaped bases. This became the foundation of how I would go about the final version. 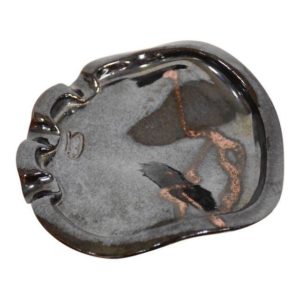 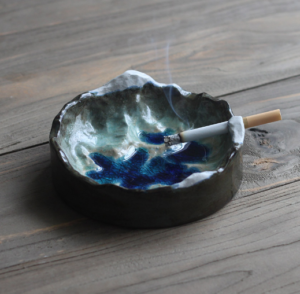 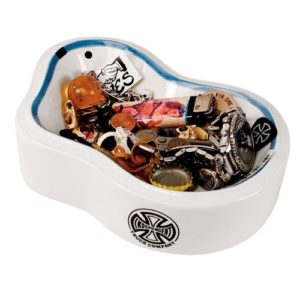